Here’s the Nonsense:  The debate tonight showed that both candidates were focused on wooing voters by presenting their plans to help America.

Here’s the Horse Sense:  Tonight’s debate showed the vast difference between what each candidate is offering to America.  Romney presented clear plans to turn America around while Obama showed he has no plan and no answers for the failures of his first term in office.

Most reporting about tonight’s Presidential Debate in New York tells little of what happened.  Conclusions are essentially split along party lines with the left (that means the Democrats and the mainstream media) trying very hard to find a win for President Obama, in spite of a lackluster performance.  Sure, he did better than in the last debate, but it was nothing to get excited about.  It was a typical Obama performance of rhetoric, lies, and avoiding his own record while attacking Romney using Alinsky tactics to try to weaken Romney’s credibility in the eyes of voters.

So, I’d be careful trusting much of what is being reported in the media.  Instead, let’s look at some facts about the debate that should help voters understand what happened tonight.

We must recognize that moderator Candy Crowley from CNN clearly showed bias in favor of President Obama.  She chose questions more apt to be problematic for Romney and favor Obama.   This meant that Romney was in for a tough battle from the word go.

As is so common in most debates, the candidate on the right has to debate an opponent while fighting the bias and efforts of moderators who are out to make sure the candidate on the left, in this case Obama, gets as good a showing as possible.  Add to that the fact that Ms. Crowley allowed 9% more time for Obama to speak and it puts Romney at a disadvantage in an uphill battle.

While Romney was continually short-changed by Crowley, he did his best to combat the lies told by Obama.  For example, when Obama tried to paint the picture that his administration has been energy industry friendly, Romney pointed out that the Obama administration has proven to be unfriendly to the industry.  He questioned the president asking how many licenses had been cut for the energy industry.  Obama danced around the question and wouldn’t answer while Romney repeatedly raised it.  Crowley made no effort to get Obama to answer.  Rather, she changed the subject and moved on so that Obama was, once again, given a pass by the media.

Fortunately the public doesn’t seem to be buying the media’s spin.  As reported on realclearpolitics.com:

That was about as significant as it was in the last debate in Denver.  It’s impressive how often we’ve seen former Obama voters move away from him and embrace Romney’s candidacy once they get to see the real Romney instead of only hearing the image of Romney put forth by Obama's campaign.

In a piece on freedomslighthouse.net that was titled “Reviewing The Presidential Debate Mitt Romney Consistently Strong And More Presidential Than A More Animated President Obama” these tweets followed from significant sources:

Fox columnist Phil Kerpen (responding to Obama’s claim that he called the Benghazi attack a terrorist attack):  “Using the word ‘terror’ does not mean you called Benghazi a terror attack.  In fact, you refused to do so for weeks and blamed a video.”

And Katie Pavlich, the News Editor at Townhall.com wrote:

As I reported earlier, the topic of Operation Fast and Furious came up at tonight's presidential debate in New York. During Mitt Romney's remarks on the deadly subject, President Obama sat in the background where he smirked and at one point, laughed.

Clearly she could see, like this picture shows, that President Obama even tried the Joe Biden method of dealing with his opponent by using facial expressions to mock and make fun of him. 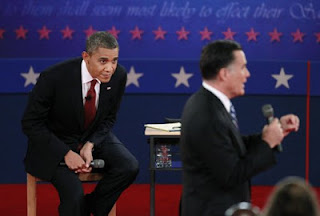 CBS News did a quick poll after the debate and clearly the reaction was very split on the question of who won: Obama 37%, Romney 30%, Tie 33% (4 pt. margin of error).  Essentially this boils down to a tie.  But interestingly CBS also asked who won on the economy and Romney received 65% and Obama 34%.  It has been said through the entire campaign that this election rides on the economy and with those results it’s clear who voters think is the man who can handle that job.

Probably the best conclusion we can have regarding tonight’s debate was stated by Democrat strategist Joe Trippi when he said “I don't think it's going to change the dynamics of the race."

What tonight tells us is that while Obama did better tonight than in the last debate, Romney’s gains in the first debate were not affected by this debate and if Obama is going to bounce back it will take more than a performance like he gave tonight.