Racism: Not What The Progressives Claim It Is 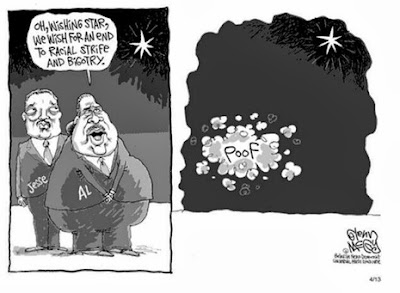 Here's the Nonsense:  Anyone who disagrees with President Obama is obviously a racist.  In fact, disagreement with any black person is always based on race and shouldn't be tolerated.

Here's the Horse Sense:  Sometimes people just disagree, regardless of what race anyone is.  It's time we quit using terms like "racist" to demonize someone you don't agree with so that their argument isn't considered valid.

What should we think of people who disagree with the views of someone who is black, or any other non-white race for that matter?  Does that make them racist as many on the left seem to presume?

These days it's common when someone disagrees with a person who is black, such as the president, that they are immediately called a racist.  But is that a legitimate accusation?  The dictionary defines a racist as someone who believes that a certain race is superior to another race or all other races.  So how does disagreeing with someone's viewpoint make you a racist?  Quite frankly, it doesn't.  The accusations that are being made are not only inaccurate, they are downright stupid.  And if the use of the word isn't out of stupidity, then it is being used as a weapon to try to demonize people and discredit them.

One of the most effective things they have come up with is to accuse anyone who disagrees with them of being racist.  This currently works well for them because the present figurehead of their movement is President Obama whose appearance is that of a black man, even though he is half white and part black (some people claim that research has shown his father was not all black which would make the president not just half black, but less than half black and that would make his predominant race white).  But their argument has nothing to do with race.  It is just a tool.  If Hillary Clinton were president, and thereby the firgurehead of their movement, they would probably call people who disagree with them sexist.

The effectiveness of using the term "racist" is heightened by the flames of racial division that they have fanned in our nation in recent years.  When there is any chance at making something look like a racial issue, whether it is or not, they fan the flames with their mainstream media counterparts jumping on the bandwagon to join in the frenzy.  A good example everyone should remember is the Trayvon Martin case.  The left went crazy trying to make the issue about race, yet when far more blacks are killed by other blacks there is virtual silence.  Race baiters like Jesse Jackson and Al Sharpton are quick to jump in and scream racism but won't face their own hypocrisy on these issues.

These accusations of racism against anyone with any sort of reservations about a progressive viewpoint are very troubling.  It shuts down rational discourse among people to find solutions to our problems.  If both sides of the political spectrum really want what's best for America, then they would try to find common ground and look for solutions.

Let me say here, though, that by "common ground" I do not mean compromise.  What I mean is agreement on the definition of what our problems really are.  For example, if we agree that the nation's continually increasing debt will destroy us, then we can work to find a solution to fix it.  However, this example is a moot point because not only do the Democrats and media think there is no problem with our debt, the establishment Republicans don't think so either.  So you cannot find solutions until everyone agrees that there really is a problem.

If the progressives are correct about racism then that means that ANYONE who disagrees with a black person about ANYTHING is a racist.  For the progressive it seems that no matter what someone disagrees with President Obama about results in their referring to them as racist.  A question for the progressives would be whether there is anything that someone could disagree with the president about and not be racist.  Sounds ridiculous, but the fact is that it is a question that exposes their lack of intellectual honesty.

For example, if someone says they disagree with Obamacare, the progressive is quick to label them a racist.  His logic is probably something like this:

It is very faulty logic.  The fact that Obamacare is already proving to be a disaster, the vast majority of Americans don't believe that the government can handle healthcare, and study after study show the faults in the program mean nothing to a progressive.  Why?  Because their ideology doesn't allow them to question their goals.  They must destroy the other side using any means necessary.  They are not out to solve problems.  They are out to transform America into a nation where only an elite progressive few make all decisions for everyone else.

If you were invited for a ride with the president and the president's limo didn't have any wheels on it the progressive would say you're racist if you felt that the president was wrong to believe that the limo would get you anywhere.  That's what a person who is blinded by ideology thinks.  You will never get them to agree there's a problem because their ideology doesn't allow them to consider the truth.  The only way they can win the argument is to demonize and call you a racist.  Then everything you say means nothing because you are not considered a trustworthy source.

It's even used when race is nowhere in sight, but they want to destroy your credibility because they see you as a threat.  That's why when Phil Robertson of Duck Dynasty responded to a question in a GQ magazine interview that he believed what the Bible says about homosexuality, those on the left attacked him and one of the things they called him was racist, even though it had nothing to do with it.  Ben Shapiro at Breitbart News tweeted:  "If Phil Robertson had cited Koran 26:165-166 instead of I Corinthians 6:9, the left would now be silent."  Mr. Shapiro is right.  Logic is abandoned in an effort to win their argument.  Their position is illogical and we weaken our position when we accept their premise that defines racism the way they do.

See the problem with their argument?  When we take an argument to an extreme it must hold up or it is nonsense.  Their arguments are nonsense and they don't care because their intent isn't to prove you're a racist, it's to discredit you and demonize you.  This is right out of their playbook, Saul Alinsky's Rules for Radicals.  We can't win the argument with them if we allow them to define the terms of the discussion.

Simply asking them how your position is racist won't get you anywhere.  You must use logic and take apart their argument or you will be down in the mud with them and you will never get them to consider your point.  And taking their logic to an extreme, as I just did, exposes them.  They cannot defend it.  For if they allow that a white person can disagree with a black person on some things, then they have to allow disagreement on other issues as well.

But if it’s racist to question the arguments of blacks, then what should we call someone who beats up black people, or prefers not to hire them, or wishes evil upon them? Disagreement is not the same thing as discrimination. Our language can expose the difference.  But it takes an open mind on the receiving end to understand it.  Only closed-minded people reject a position without considering it.

A key element of the term “racist” would be hostility or malice toward the black community. Simply having a difference of opinion with a black person and saying so in a respectful way, is no reason to automatically assume the person is racist.  Disagreement doesn't make you anti-black.  If you disagree with your spouse are you anti-wife or anti-husband?  If you disagree with your child are you anti-child?  If you disagree with your boss's decisions does that make you anti-company?  (I know, that last one is probably more often than not misunderstood by bosses, but the fact is that there's nothing wrong with disagreeing with them when their logic is faulty.  See my book on leadership, Many Are Called But Few Can Manage, to learn more on how managers should lead.)

Disagreement in a respectful fashion is not wrong.  It is not hateful.  In fact, disagreement is often the best way to find solutions when the disagreement is about how to fix something.  The problem with progressives, no matter which side of the political aisle they sit on, is that they do not recognize as problems those things that are destroying our nation.  Whether it's Harry Reid, Nancy Pelosi, Barack Obama, Hillary Clinton, John McCain, Lindsey Graham, or any of the other progressives in government, their goal is to have more power, not fix America's problems.

With progressives there is such closed-mindedness and devotion to ideology over rationale that you cannot debate with them logically.  It is important to understand that their politics must be overcome because they are not interested in finding ways to solve America's problems.  They only want to transform America into a society without freedom where they can control what you do, where you live, where you work, and what you think.  It's time to get them out of our lives once and for all.  America needs good old self sufficiency, not the fundamental transformation that the progressives are trying to force upon us.