Here's the Nonsense:  Hillary Clinton is making it clear that the foreign policy she pursued as secretary of state was Obama's policy, not hers.  That should make it clear that she isn't responsible for what happened on her watch and therefore prove she's qualified to be president.

Here's the Horse Sense:  Hillary is saying she represented Obama's foreign policy and not her own so that she can distance herself from Obama's failures.  But if she had integrity and really didn't embrace his policies then she should have resigned in protest instead of promoting terrible strategy.

Just think of it.  Virtually anyone else that might have been Secretary of State wouldn't get away with it.  But Hillary Clinton is almost as slippery as her husband when it comes to keeping a negative past from sticking to her reputation.  And this latest effort to move away from the foreign policies that she was in charge of promoting as secretary of state is nothing more than a political ploy.  She wants her record to be acceptable to the American people should she decide to run for president.  And even if she doesn't, she, like her husband, wants her legacy to appear positive instead of what it really is.

America has a terrible vacuum of leadership.  And, with limited exception, the people that are being seen as potential future leaders aren't any better.  With the American people crying out for change from the failed policies of the Obama administration, any potential candidate for national office has to scramble to get away from them to have a chance at success in their bid for office.  And now, as Hillary Clinton is considering a possible run, she must move to the right and away from her heartfelt far left ideals if she is to be seriously considered by the American electorate.  Hillary, just like her husband Bill and virtually every Democrat and establishment Republican, knows that to win elections in America you have to make the public think you're more conservative than you are or they won't consider you as a viable choice.  This is part of Hillary and Bill's efforts to make her appealing to voters should she decide to run.

While Politico reports that Hillary has taken a position of disagreement with Obama's foreign policy, the Weekly Standard is reporting the White House says that she was on board with their positions.

Let's face it.  If Hillary were truly a leader she'd have resigned in protest from the Obama administration and taken a stand that what was being done with foreign policy was the wrong thing to do.  The buck may ultimately stop at Obama's desk, but the fact is that as the head of the department, Hillary has to take responsibility for promoting the policies that Obama wanted her to pursue.

A true leader would walk away from something with which they disagree.  A true leader does what is right regardless of the cost to themselves.  They are more interested in doing what's right than they are in the consequences to their own career.  But we will never see that from this administration, anyone in it, or that has ever been affiliated with it.  And that applies to Bill Clinton and his administration, too.

If this is the best that America has to offer for leadership, then there is no hope for America. 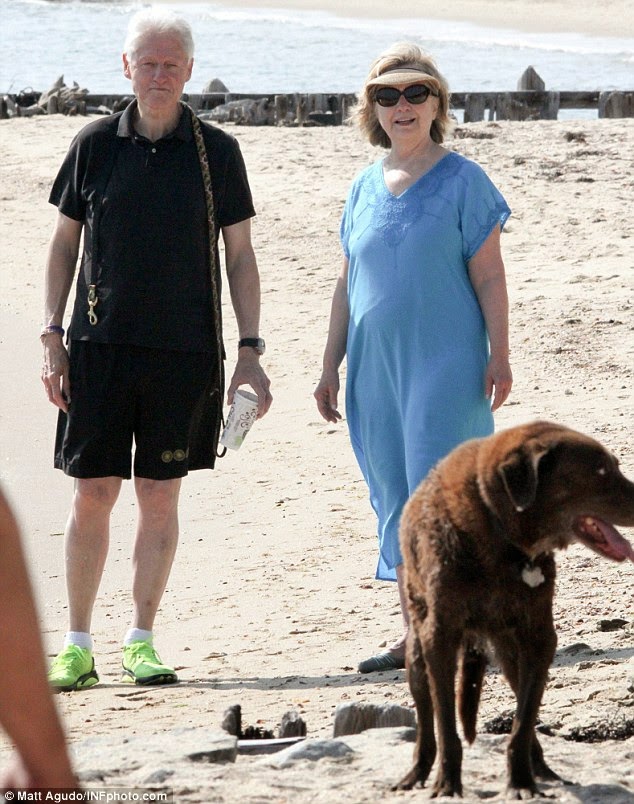 Picture from U. K. Telegraph article telling of Clinton's vacation on Martha's Vineyard 2014.

Recently people have been asking if Mitt Romney will save the GOP by running again in 2016.  As recently as this past weekend the U. K Telegraph reported such a story.  And while Mitt Romney has shown himself to be a good man, with far more integrity than any Democrat we've seen in national politics in decades, he is still not the answer for America.  Yes, he could run and have a good chance at getting elected.  But while he loves America and has some skills that could help our nation, he's still too oriented to establishment GOP politics and big government.  And that would not solve America's problems.  It would slow down the impending disaster, but it wouldn't fix the core problems.

What America needs is someone who will bring both integrity and the types of policies embraced by Ronald Reagan to save America.  However, don't think that even Reagan could easily fix America.  Things today are far worse than they were when Reagan took office in 1980.  If he were to take office today the job would be far more difficult and possibly not even achievable, unless the American people are willing to pay the price required to turn our nation around.

Last week I was on a radio talk show and the host asked me if there was hope to turn America around.  I responded saying that as a businessman looking at the situation America is in I don't believe that it is possible.  But then I went on to say that as an American looking at our history I do still think there's hope.  The reason for that, I said, is that American's have always been known to rise to the occasion when pushed into a corner.  My hope is that that will happen again.  But it must happen soon or it will be too late.

Sadly the host laughed when I said that.  I don't really know why he laughed.  It is a serious subject and we are in very dire straits as a nation.  There is nothing to laugh about.  But he might be like a commenter to an article I read this morning who said he couldn't wait until Obama was out of office in 2 years and then the country could return to normal.  I have news for people who think that's all it will take to fix things:  Obama is not the problem.  The problem is much deeper in America.

As I wrote in my book No Tomorrows, America has 3 core problems:

1.)  Debt - Our debt drives our economy and without stopping the outrageous spending in Washington and paying off our debt it is impossible to create a long-term successful economy with jobs and security for Americans.  Our national debt is over $17.6 trillion and our unfunded liabilities, which are nothing more than more debt, are over $118 trillion as can be seen here.  They are at a point where it would be virtually impossible to ever pay them off. (Our total national assets are just over $112 trillion.  That means that if you sold the entire country and everything in it we still wouldn't get enough money to pay our debts.)  Only significant changes will give us a chance to overcome this obstacle.

2.)  Leadership - We don't know how to pick true leaders.  We choose people for all the wrong reasons.  For example, as good a man as Dr. Ben Carson seems to be, what qualifications has he shown for leadership?  He gave a good speech at the national prayer breakfast and offended President Obama with it.  He even refused to apologize when the White House called him later that day and asked him to apologize.  That made him a man many on the right liked, but it didn't show qualifications for leadership.  That's why I outlined the traits of a true leader in my book The Leadership Secret.  It gives 16 clear traits that are required for a person to truly be a leader.  (By the way, Dr. Carson might have great qualifications and ability, but we just don't know enough about him to be able to make a good decision at this point.)

3.)  Morality - We must abandon being an immoral nation and return to the religious and moral foundations upon which our nation was founded.  Contrary to President Obama's recent claim that Islam formed the fabric upon which America was built, the fact is that America was built on the foundation of Judeo-Christian values.

"Our Constitution was made only for a moral and religious people.  It is wholly inadequate to the government of any other."

He fully understood that a nation without a moral compass could not survive as a free nation.  And America has fallen from morality to depravity.  By doing something as simple as turning on a television you can see blatant immorality these days.  From disgusting humor to promoting sex outside of marriage, living together outside of marriage, greed being promoted as good, the use of "little white lies" as a way to get away with things or avoid hurt feelings, to a list that if I tried to write it would be so long that I'd run out of space.  America is a cesspool and until we are willing to abandon those practices and face God to seek forgiveness, we have no chance at survival as a nation.

Of the 3 core problems I listed above, the third one will determine our future more than anything else. It's that simple.  The choice is up to the American people.