With All The Accusations That Trump's Not A Conservative, Do His Goals For America Work For Conservatives?

Here's the Nonsense:  Trump isn't a conservative and shouldn't be considered as a legitimate candidate.

Here's the Horse Sense:  Trump isn't running as a conservative, he's running as a candidate who will tear down the failed system.  Judgment shouldn't be made without looking at what he proposes for America.

There's a split among conservatives in America about which candidate to support.  And some are saying that those who support Donald Trump are abandoning conservatism because Trump isn't a conservative.  The debate has become a war with non-supporters of Trump getting so exorcised over the issue that many are refusing to vote for Trump in the general election if he wins the nomination.  It's very reminiscent of the Ron Paul supporters during the 2012 election.  Do Trump's goals for America mesh with conservative goals?

Back in July I wrote about Trump's plans for America.  The article was so popular that copyright law was violated as it was stolen a number of times and attributed to authors such as General Chuck Yeager and Peggy Noonan.  I obtained the information I wrote from things he'd written mostly prior to the 2012 election, such as Trump's own book, Time To Get Tough.  Contrary to what some of his detractors are inferring, he didn't come up with the ideas just before announcing he was running for president.  And, as Rush Limbaugh, who personally knows Donald Trump, has said, the ideas Trump is talking about are things he's heard him talk about for years.  So, here is the list for you to see and make your judgment:


1.)  Trump believes that America should not intervene militarily in other country's problems without being compensated for doing so.  If America is going to risk the lives of our soldiers and incur the expense of going to war, then the nations we help must be willing to pay for our help.  Using the Iraq War as an example, he cites the huge monetary expense to American taxpayers (over $1.5 trillion, and possibly much more depending on what sources are used to determine the cost) in addition to the cost in human life.  He suggests that Iraq should have been required to give us enough of their oil to pay for the expenses we incurred.  He includes in those expenses the medical costs for our military and $5 million for each family that lost a loved one in the war and $2 million for each family of soldiers who received severe injuries.

2.)  Speaking of the military, Trump wants America to have a strong military again.  He believes the single most important function of the federal government is national defense.  He has said he wants to find the General Patton or General MacArthur that could lead our military buildup back to the strength it needs to be.  While he hasn't said it directly that I know of, Trump's attitude about America and about winning tells me he'd most likely be quick to eliminate rules of engagement that handicap our military in battle.  Clearly Trump is a "win at all costs" kind of guy, and I'm sure that would apply to our national defense and security, too.

3.)  Trump wants a strong foreign policy and believes that it must include 7 core principles (which seem to support my comment in the last point):

4.) Trump believes that terrorists who are captured should be treated as military combatants, not as criminals like the Obama administration treats them.

5.)  Trump makes the point that China's manipulation of their currency has given them unfair advantage in our trade dealings with them.  He says we must tax their imports to offset their currency manipulation, which will cause American companies to be competitive again and drive manufacturing back to America and create jobs here.  Although he sees China as the biggest offender, he believes that America should protect itself from all foreign efforts to take our jobs and manufacturing.  For example, Ford is building a plant in Mexico and Trump suggests that every part or vehicle Ford makes in Mexico be taxed 35% if they want to bring it into the U. S., which would cause companies like Ford to no longer be competitive using their Mexican operations and move manufacturing back to the U. S., once again creating jobs here.

6.)  Trump wants passage of NOPEC legislation (No Oil Producing and Exporting Cartels Act - NOPEC - S.394), which would allow the government to sue OPEC for violating antitrust laws.  According to Trump, that would break up the cartel.  He also wants to unleash our energy companies to drill domestically (sound like Sarah Palin's drill baby, drill?) thereby increasing domestic production creating jobs and driving domestic costs of oil and gas down while reducing dependence on foreign oil.

7.)  Trump believes a secure border is critical for both security and prosperity in America.  He wants to build a wall to stop illegals from entering put controls on immigration. (And he says he'll get Mexico to pay for the wall, which many have scoffed at, but given his business successes I wouldn't put it past him.)  He also wants to enforce our immigration laws and provide no path to citizenship for illegals.

8.)  Trump wants a radical change to the tax system to not only make it better for average Americans, but also to encourage businesses to stay here and foreign businesses to move here.  The resulting influx of money to our nation would do wonders for our economy.  He wants to make America the place to do business.  He also wants to lower the death tax and the taxes on capital gains and dividends.  This would put more than $1.6 trillion back into the economy and help rebuild the 1.5 million jobs we've lost to the current tax system.  He also wants to charge companies who outsource jobs overseas a 20% tax, but for those willing to move jobs back to America they would not be taxed.   And for citizens he has a tax plan that would allow Americans to keep more of what they earn and spark economic growth.  He wants to change the personal income tax to:

9.)  Trump wants Obamacare repealed.  He says it's a "job-killing, health care-destroying monstrosity" that "can't be reformed, salvaged, or fixed."  He believes in allowing real competition in the health insurance marketplace to allow competition to drive prices down.  He also believes in tort reform to get rid of defensive medicine and lower costs.

10.)  Trump wants spending reforms in Washington, acknowledging that America spends far more than it receives in revenue.  He has said he believes that if we don't stop increasing the national debt once it hits $24 trillion it will be impossible to save this country.

11.) Even though he says we need to cut spending, he does not want to harm those on Medicare, Medicaid, or Social Security.  He believes that the citizens have faithfully paid in to the system to have these services available and that the American government has an obligation to fulfill its end of the bargain and provide those benefits.  Therefore, he wants to build the economy up so that we have the revenue to pay those costs without cutting the benefits to the recipients.  He disagrees with Democrats who think raising taxes is the answer and says that when you do that you stifle the economy.  On the other hand, when you lower taxes and create an environment to help businesses they will grow, hire more workers, and those new workers will be paying taxes that become more tax revenue for the government.

12.) Trump also wants reform of the welfare state saying that America needs "a safety net, not a hammock."  He believes in a welfare to work program that would help reduce the welfare roles and encourage people to get back to work.  And he wants a crackdown on entitlement fraud.

14.) Trump opposes Common Core.  Education must be run locally.  Decisions should be made by parents and local school boards.

15.) Trump is pro-life, although he allows for an exception due to rape, incest, or the life of the mother.

17.) Trump's view on same-sex marriage is that marriage is between a man and a woman, but he also believes that this is a states rights issue, not a federal issue.


John Nolte at Breitbart wrote a 2 part article last September that addressed what Trump offers conservatives (you can read both parts of his articles here and here).  In those articles he points out that Trump supporters know that Trump will:

And in his conclusion he writes: 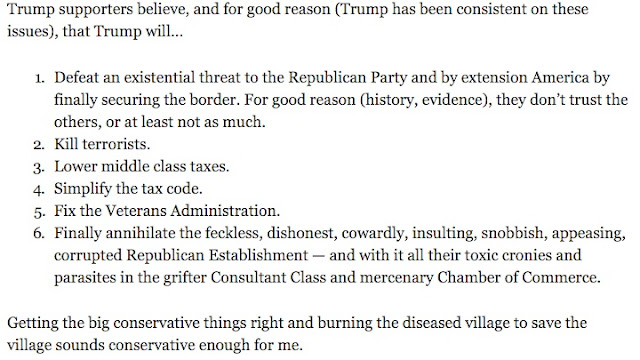 Nolte makes a good point and when you look further you learn that Trump has wanted to do many things for this country that fit well within conservatism.  Right now there are many people in the Republican Party, especially Cruz supporters, trying to destroy Donald Trump.  They are acting like Ron Paul's supporters in 2012 that refused to vote for anyone when their candidate did not get the nomination.

That is sad no matter who is doing it to whom because Republicans are notorious for destroying each other in the primaries and then handing the general election to the Democrats.