You'll Never Have A Vote Again

Here's the Nonsense:  Primary and Caucus voters shouldn't worry about how things are handled.  They should trust that the people running the parties are doing what's best for them.

Here's the Nonsense:  The political party apparatus has become so corrupt that now Americans are at a place where the idea of government of, by, and for the people is not longer a reality.  We've allowed those in control to get out of control.

While most people in America couldn't care less what happens in Colorado politics, they are being very short-sighted for not paying attention.  The result could very well be the loss of you having a right to vote ever again in your own state.  This should be a wake up call for all Americans, not just for those in Colorado.

Not too many years ago Colorado was changed from a red state to a blue state in only 2 election cycles.  I've written and spoken about it, and it's a serious issue for the entire nation.  But most people across the country ignored it thinking that it could never happen to their state.  Now we see more things happening in Colorado that are even worse.  What is happening now could very well take away your vote wherever you live, regardless of whether your state is blue or red.

The media is reporting that Ted Cruz got all the delegates in Colorado.  Yes, he did.  BUT HE DIDN'T WIN ANY.

That's right, Ted Cruz didn't win one delegate from Colorado.  They were given to him as a gift form the Colorado Republican Party.

So, when Ted Cruz got all the delegates in Colorado this past week, it was because the GOPe decided to throw them to him without the proven support of the voters.    This angered some voters so much that voters like Larry Wayne Lindsey of Douglas County, Colorado (just south of Denver) followed the party's action by doing things like Mr. Lindsey did and posted to his Facebook page here.

This is about more than just Trump supporters being cut out of the process.  It's about all voters losing their right to have a say in who they want as their elected officials.

Yes, I can already hear the Cruz supporters once again firing up their keyboards to send me more hate emails saying that I just don't like it because I don't support Cruz.  What they don't get is that this is not about who the candidate was that got the delegates.

It's about a voter having the right to cast their vote to make their voice known for their choice.  After all, America is supposed to be a government of, by, and for the people.  But if the controlling officials in a political party decide they don't care what the voters say and will change rules so they can control the outcome, then we really don't have the right to choose who governs us anymore.

It's no different than standing up for someone's right to freely speak their opinion, even when, no, that should be ESPECIALLY WHEN they disagree with us.  That's what freedom is about.  That's what America is about.

Now, I know there are those of you out there thinking something like, "Well, the political party has a right to set its own rules."

Yes, they do.  But when the party officials decide to control outcomes, then it's either time for reform of the party or for a new party to take its place.

The GOPe who control the Colorado Republican Party saw early on that Donald Trump had a good chance at winning the nomination and took action in the middle of last year so that he would have no chance at getting any support from Colorado.

I received a photo of a resolution put forth for the Colorado GOP delegates that is pretty unsettling.  I'm going to put the picture here so you can see it, but below it I have also retyped it so that you can see what it says more clearly. 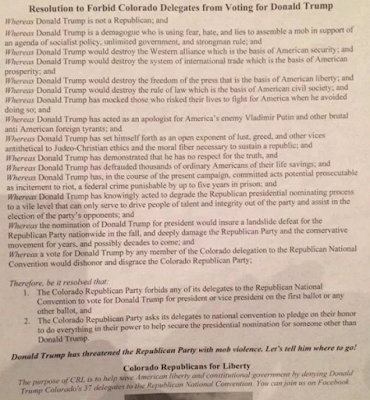 I have to say that not only is this document filled with lies and innuendo, but appears to be to be libelous potentially opening the door to litigation.  Of course, even though I've worked a lot around attorneys, contract law, and legal issues for many years, I'm no attorney, so that's only my layman's opinion.  But at the minimum it is irresponsible.

And to show their glee at taking any chance away from Trump, the Colorado GOP tweeted this celebrating their victory over the voters (I say over the voters because it's really not about Trump, it's about voters having a say in the selection of a candidate): 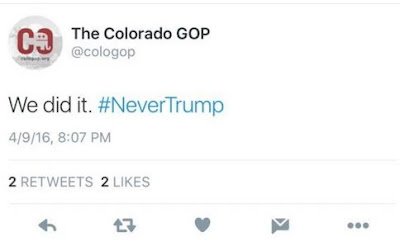 Even if those controlling the Colorado Republican Party preferred another candidate, to celebrate that they've just stopped the voice of voters is disgusting.  And yes, it is possible that Trump would have lost anyway, but the point is that this is about what the voters want, not what the party leaders want.

And if those people lose control of the candidate, they have no influence to control what an administration does should that candidate win.

But, when Trump's name comes up it's so easy for people to get off track, regardless of whether they support him or not. The bottom line here is that the Colorado GOPe has now shown exactly what the national GOPe would like to be able to do to control the elections.

This is an important issue and voters need to be aware and start taking control of their state parties.  The people in power have far more power than citizens realize.  The GOP is not your friend.  They are insidious and need to be watched and held accountable.

That's why this election is so critical.  It may even be too late already, but we have to go down fighting.  Who among you wants to try to explain to their grandchildren why they let freedom slip away?