On Memorial Day Remember: We Do Not Owe Japan An Apology For Using The Atomic Bomb

Here's the Nonsense:  Dropping the atomic bombs on Japan was a terrible thing and the devastating consequences should cause us to rethink that decision and ever using those types of weapons again.  We do owe Japan an apology for the destruction we brought upon them.

Here's the Horse Sense:  No apology is needed for using the atomic bombs against Japan in World War II.  Not only did we stop a regime that was committing unspeakable atrocities, but we saved millions of lives in doing so.  It would be an insult to those who have served our country to make an apology for that decision.

Most people are aware that President Obama is visiting Hiroshima, Japan on May 27, the site where America dropped the first atomic bomb in World War II.  The NY Times reports that while he will be the first sitting U. S. President to visit Hiroshima, the White House says that he will not be apologizing for America's action to end the war over 7 decades ago.  Yet Yahoo is reporting that there are those in Japan who are insisting that he should apologize for what America did.

Obama is anti-nuclear weapons and has worked hard to eliminate as many of our nuclear stockpile as possible during his presidency.  So, it is somewhat surprising that the American president who has apologized for America all around the world will not be apologizing to Japan for our use of atomic bombs to end World War II.

Last year Charles Pellegrino's highly acclaimed book, To Hell and Back: The Last Train From Hiroshima, was released.  It will overwhelm the reader with the most detailed and what are said to be the most accurate descriptions of what happened when the atomic bombs were detonated over Hiroshima and Nagasaki. It will unsettle you and make even the most ardent supporter of nuclear weapons hope and pray they never have to be used again.

But with all the devastation caused by those bombs used against Japan, those believing America should apologize miss the most basic logic why America owes no apologies and should never entertain such an idea.

Between the lack of accurate teaching of history in American schools, along with an overriding view of the majority of American educators that America is an evil nation guilty of war crimes and evil deeds beyond those of any other nation, the truth has been buried.

So, in an effort to remind those who may have forgotten and to educate those who never learned about it, I'd like to share some of the atrocities committed by the Japanese during World War II that were, in part, reasons why America's use of the atomic bomb was required to put an end to the horrors. 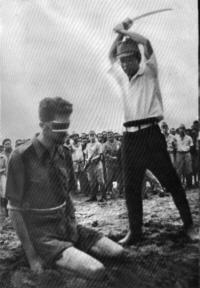 Japanese soldier Yasuno Chikao prepares to behead Australian Sgt. Leonard G. Siffleet at Aitape in New Guinea in 1943.  The Australian commando was captured while his patrol was operating deep behind enemy lines.  The Japanese claimed he was a spy, but he was in uniform when captured.  The Japanese were extremely brutal to Allied prisoners of war, often killing them through forced labor, beatings, beheading and starvation.

Doolittle Raid on Japan - the flyers landed in China:


These are some of the horrendous atrocities committed by the Japanese during World War II.  They were not dissimilar to things we hear of ISIS doing today.

While the Japanese government has expressed some apologies for acts committed by their military in World War II, it seems that there is a split among the Japanese as to how bad their actions really were.  Their schools teach revised historical accounts of World War II that do not tell of the horrors and the government supports those false teachings.

As a result it is hard for the Japanese people to fully accept the destruction caused by America's atomic bombs dropped on Hiroshima and Nagasaki.  America's use of atomic weapons is seen as extreme aggression, even a war crime by many.  Without accurate teaching of Japan's aggression against America in their surprise Pear Harbor attack and the actions of their military throughout the war, the people of Japan have no ability to face their responsibility for causing America to resort to using those weapons.

Military experts estimated it would cost 1 million American lives to defeat Japan because their culture believed it was better to die than surrender.  Their entire population planned to fight to the end and, if necessary, commit suicide instead of surrender.

The destruction and loss of life due to the atomic bombs was minor by any measure compared to what would have happened had America used traditional warfare to finish the war.  Even for the Japanese, far fewer lives were lost than would have been if America had handled it any other way.

President Harry Truman's decision to drop the bomb was, in reality, a merciful decision both for Japan and the U.S.  No apology is due for the results of that decision.  Yes, it should cause introspection to think about the consequences of such an action.  But it would be an insult to those Americans who have served our country to apologize for that courageous and wise decision that ultimately saved millions of lives from many nations.