According To The Media, Trump Should Give Up Because He's Already Lost The Election

Here's the Nonsense:  Hillary Clinton has the election in the bag.  Every news source I look at says it's all over for Trump.  He might as well go home.

Here's the Horse Sense:  It's way too early to conclude the election is already over.  In fact, what you're seeing from the media may actually be efforts to get you to think it's over and not vote. There's all sorts of evidence that not only is the race not over yet, but Hillary isn't doing as well as they'd have you believe.

Is it just me, or have any of you noticed that the media keep telling us that Trump is losing and Hillary is winning?  The media wants us to think Trump is losing so badly that he might as well give up.  They go on and on about how badly he's losing.  They'd want you to believe that his poll numbers are so bad that they are in the negatives at this point.

Here is part of a list compiled by the Capital Research Center of some of the things the media has said in just a 2 week period this month about how badly Trump is doing (this list is very long but should make a point about their ceaseless efforts to destroy Trump's campaign) :

August 20th:
CNN - (Martin Savidge) - "Donald Trump's falling polling numbers, they are fueling GOP concerns that the presidential candidate could hurt Republicans in tight congressional races.... John Phillips is a CNN Political Commentator and Trump supporter.  So Joh, I'll start with you.  How vulnerable do you see hat they're calling down ballot Republicans if the polling numbers continue to fall for Donald Trump?  How bad off are they?"

Yet no one notices that those against Trump are using many of the same types of criticisms of him as they used of Reagan in 1980.  They saw Reagan as the outsider that he was and wanted no part of him.  Reagan ran against incumbent Democrat President Jimmy Carter and Independent John Anderson.  But the poll results for Reagan in August/September 1980 were nothing for his campaign to feel good about:


But by election day these were the results:


Yes, it's possible Trump is in trouble, but when you consider some other facts it should make you pause.  Remember that Hillary:

If Hillary is doing so well, then why can't she get crowds at her events that are of similar size to Trump's?

Political pollster Pat Cadell appeared on Fox News Channel this weekend with some interesting comments, as this screenshot from Breitbart shows:

And later in the interview he said: 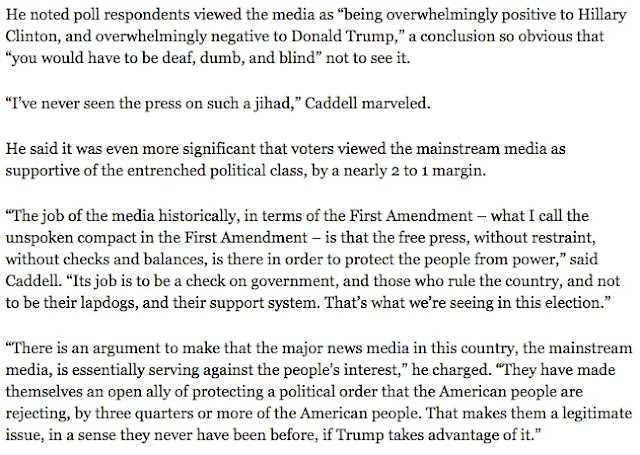 Don't forget, too, that huge numbers of Americans are showing up at Trump rallies and when asked about their view of America's political environment they say such things as:
I have one more thing for you to think about.  Trump has been proclaimed dead in his chances over and over and over again.  His competitors in the primaries, the establishment GOP, the NeverTrumpers, the media, and the Democrats have all proclaimed over and over again that he was done and it was over.

Yet every single time Trump has risen up and gained even more momentum.  No one has been able to stop him.

If I were a betting person the last thing I'd do is bet on Trump being out.  He's proven numerous times in this campaign that he's a formidable force and will not easily be beaten.

He's not out.  He's been coming on strong against Hillary.  Her campaign is frantically fundraising and buying advertising, but if she was a guaranteed winner, why would they be so frantic?

They are also keeping Hillary out of sight as much as possible (they know that when she stays out of sight she does better with voters).  Between now and the first debate in late September there are numerous events on her campaign's schedule, but all of them are scheduled to be handled by surrogates for her.  She is not currently scheduled to appear until that first debate on September 26.

The media and Democrats wouldn't be acting the way they are if they weren't scared that Trump will beat them.

There is still a long way to go before election day.  Most Americans don't even pay attention to the presidential election until after Labor Day.  By then the kids are back in school, summer is essentially over, and they are settling in to their fall schedules.  That's when the actually start to pay attention to the candidates and what they are saying.  The 2 months between Labor Day and Election Day will tell the story, and yet don't forget what happened to Reagan.  Up until the very end they had him pegged to lose and he won in a landslide.