The GOPe Working Hard To Get Hillary Elected

Here's the Nonsense:  This is just another election. If things don't work out we can redo it in 4 years.

Here's the Horse Sense:  This election is a fight for the soul of America.  Money and power are at stake. Whether they realize it or not, anyone who doesn't stand with Donald Trump is helping Hillary Clinton get elected.  And if Hillary is elected not just America, but the entire world will never be the same again.

Anyone who thinks the GOPe (GOP establishment) has the best interest of America at heart is fooling themselves.  There is a concerted effort to get Hillary Clinton elected by every Republican who is not enthusiastically supporting Trump over Hillary in this election.  There is hardly a day that goes by without more Republicans trying to take a swipe at Trump's candidacy in hopes that it will help Hillary get elected.  And now their latest efforts come from a group of former national security officials that have worked for a variety of Republican Presidents.

The NY Times has published a letter from these Republicans opposing the election of Donald Trump. What this boils down to is a vote for Hillary Clinton.  They, as part of the GOPe, are tied to the globalist Uni-party and are fighting to keep control of our government out of the hands of the citizens.  They know there are hundreds of billions, or more likely trillions of dollars at stake.  Those who control them are putting pressure on these people to make sure Trump doesn't have a chance to win and Hillary becomes the next president.

(You can read the letter at the NY Times link above or the PDF of it by clicking here.  Or, at the end of this post I've put screenshots of it in for those who prefer to read it here, although the PDF link may be the easiest to read.)

These people are no better than traitors to America.  They have sold out what our founders set up as the most unique and free nation on earth.  They are trying to keep America on the path of destruction that the globalist agenda has planned for our nation.  In doing so they spit in the face of every patriot who loves America, especially those who have given their lives for our freedom over the centuries.

This is nothing short of disgusting.  This should be yet another reason to drive every American to the polls this November to make sure Hillary Clinton does not win.  The only way to overcome their voter fraud and election tampering is with such a huge landslide that their cheating can't overcome the sheer size of a Trump victory.

Donald Trump wasted no time in responding to the globalist's letter.  From his website:

"The names on this letter are the ones the American people should look to for answers on why the world is a mess, and we thank them for coming forward so everyone in the country knows who deserves the blame for making the world such a dangerous place.  They are nothing more than the failed Washington elite looking to hold onto their power.  And it's time they are held accountable for their actions.

These insiders - along with Hillary Clinton - are the owners of the disastrous decisions to invade Iraq, allow Americans to die in Benghazi, and they are the ones who allowed the rise of ISIS.  Yet despite these failures, they think they are entitled to use their favor trading to land taxpayer-funded government contracts and speaking fees.  It's time we put our foot down and declare that their gravy train is over:  no longer will Crooked Hillary Clinton and the other disasters in Washington get rich at our expense.

Instead, I offer a better vision for our country and our foreign policy - one that is not run by a ruling family dynasty.  It's an America first vision that stands up to foreign dictators instead of taking money from them, seeks peace over war, rebuilds our military, and makes other countries pay their fair share for their protection.  Together, we will break up the rigged system in Washington, make America safe again, and we will Make America Great Again."

This is America's last chance and no one better take it lightly. Educate your friends, neighbors, co-workers, and people you meet each day.  It's an American revolution through the voting process and citizens must not be derelict in their duties.


Here are the screen shots of the first 1 3/4 pages of the document document (the remaining 6 1/4 pages are the names of the signatories of the document, which I felt were just too long a list to place screenshots here, but you can read them at the links in my post above): 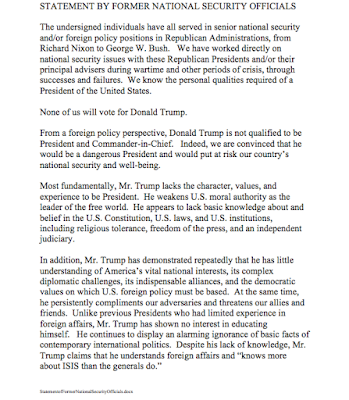 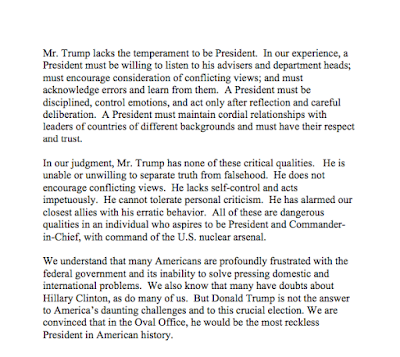